Ben-Hur Table of Contents of the On-Line Edition. Cf. Ben-Hur in Print, at Amazon 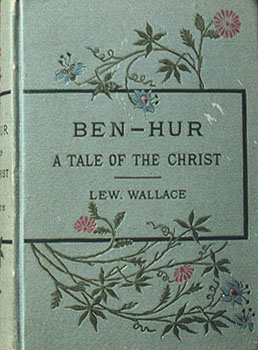 “Who could resist? Who in this universe?

She did so breathe ambrosia, so immerse

My fine existence in a golden clime.

And cradled me in roses. Thus condemn’d,

The current of my former life was stemm’d,

And to this arbitrary queen of sense

“I am the resurrection and the life.”

GUESTS IN THE HOUSE OF HUR.

ESTHER- Esther! Speak to the servant below that he may bring me a cup of water.”

“Would you not rather have wine, father?”

“Let him bring both.”

This was in the summer-house upon the roof of the old palace of the Hurs in Jerusalem. From the parapet overlooking the courtyard Esther called to a man in waiting there; at the same moment another man-servant came up the steps and saluted respectfully.

“A package for the master,” he said, giving her a letter enclosed in linen cloth, tied and sealed.

For the satisfaction of the reader, we stop to say that it is the twenty-first day of March, nearly three years after the annunciation of the Christ at Bethabara.

In the meanwhile, Malluch, acting for Ben-Hur, who could not longer endure the emptiness and decay of his father’s house, had bought it from Pontius Pilate; and, in process of repair, gates, courts, lewens, stairways, terraces, rooms, and roof had been cleansed and thoroughly restored; not only was there no reminder left of the tragic circumstances so ruinous to the family, but the refurnishment was in a style richer than before. At every point, indeed, a visitor was met by evidences of the higher tastes acquired by the young proprietor during his years of residence in the villa by Misenum and in the Roman capital.

Now it should not be inferred from this explanation that Ben-Hur had publicly assumed ownership of the property. In his opinion, the hour for that was not yet come. Neither had he yet taken his proper name. Passing the time in the labours of preparation in Galilee, he waited patiently the action of the Nazarene, who became daily more and more a mystery to him, and by prodigies done, often before his eyes, kept him in a state of anxious doubt both as to his character and mission. Occasionally he came up to the Holy City, stopping at the paternal house; always, however, as a stranger and a guest.

The visits of Ben-Hur, it should also be observed, were for more than mere rest from labour. Balthasar and Iras made their home in the palace; and the charm of the daughter was still upon him with all its original freshness, while the father, though feebler in body, held him an unflagging listener to speeches of astonishing power, urging the divinity of the wandering miracle-worker of whom they were all so expectant.