Authenticity of the remains of St. Luke the Evangelist in Padua

According to an old tradition, Luke the Evangelist was born in Antioch (Syria), died at a very advanced age (84 years) and was buried in the city of Thebes, capital of the Greek region of Boeotia. From here – as it is confirmed by St. Jerome – his remains were removed to Constantinople and conserved in the Basilica of the Twelve Apostles in the second half of the  4th century.

In the Middle Ages, more precisely in the 11th and 12th centuries, in the cemetery area of Prato della Valle adjacent to the monastery of St. Justina, the remains of numerous saints were unearthed. Manuscripts dating back to the 14th and 15th centuries, based on hagiographic texts of earlier date, relate a new discovery (inventio) that occurred in 1177: they speak of miraculous phenomena (fragrant smells associated with the remains, people having dreams within which apparitions linked to the discovery occurred), and they also mention the identification of the titulus (i.e. the inscription hearing the name of the dead person) and of the symbol featuring three calves on the case containing the remains. All this spurred abbot Dominic and the bishop of Padua, Gerardo Offreducci, to travel to Ferrara in order to meet Pope Alexander III (who was currently stationed there), so that he would certify that the corpse belonged to St. Luke. 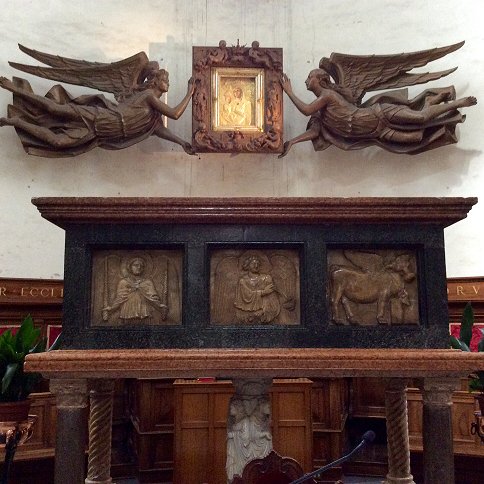 But how the remains were in Padua, and not in Constantinople? The manuscript mentions that the remains of St. Luke, together with the relics of St. Matthias, were removed from Constantinople in the times of the Emperor Julian the Apostate (361-363 AD); other sources suggest the 8th century iconoclast persecution as probable date for the transfer: actually historians are still evaluating the plausibility of such hypotheses.