Adluri on Parmenides and the Transcendence

Parmenides, Plato and Mortal Philosophy – Return from Transcendence, belongs to a type of books that has become rare. Its author is not writing because he is ‘obliged’ by his academic position nor to make some impression in this or the other circle of intellectuals, but being interested in his subject and enjoying thinking. The book contains a translation of Parmenides with useful notes. 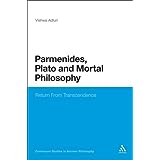 Adluri meets with Parmenides at the crossroads of mortality with immortality, and it is certain that not everyone would agree even about the location of these crossroads. The author argues in favor of a view of Parmenides’ thinking, according to which the great presocratic philosopher first “presents a metaphysical realm, and then returns to the mortal universe”, in a “commitment to preserving mortal temporality and thus dignifying mortal individuality and existence”. Parmenides’ vision of immortality comes out of his dignifying not, of course, mortal but the individual existence, as is known even in the condition of suffering in mortality.

In the same context the author repeats an old error, suggesting that there exists a connexion between tyranny and monism, although history itself teaches us that there can be tyranny in dualist or even atheist cultures, while, on the other hand there can be and there has been openness in monistic cultures.

The author is linking individuality and mortality so tight (see e.g. p. 7: “individuality and its mortal temporality…”), that one is tempted to think of death as a blessing! Adluri tries to recognise in (some aspects of) the philosophical thinking a love-for-home or homesickness, when the experience of home includes that of death. But how is it possible for men to see in death their home? I can not but be surprised when I read that “Parmenides’ kouros seeks a home in the realm of being; but, crucially, he is not satisfied with this and returns, I argue, to his true home”, to the time and place of death, where he finally, I guess, finds satisfaction… This is just absurd. (Cf. the author’s reply on this remark, in the “Comments” section, right after the review.)

I sympathise with the author’s attempt to discover the fertility of a thinking that is transferred from the laws of logic to the experience of life, but this turn presupposes precisely a deep experience of life and death. It may be my fault, the responsibility of which I admit wholeheartedly if it is indeed a fault, but I can not recognise demanding thinking and a deep experience of life when death is considered the home of man, metaphorically or not. Likewise, I can not agree with the term ‘mortal philosophy’. Even ‘philosophy of death’ or ‘philosophy of mortality’ would be disputable terms, since philosophy is always about life and from and for life, inside this main focus including also a thinking about death.

In general, despite whatever one can see as a defect, Adluri’s work is thought provoking, the result of arduous study and an existential concern that is usually missing from modern schools.