Burnet and the birth of philosophy in Greece

Here is how Burnet emphasizes the Greek meaning of philosophy (in Burnet, Development of Greek Philosophy):

“The word ‘philosophy’ is Greek and so is the thing it denotes. Unless we are to use the term in so wide a sense as to empty it of all special meaning, there is no evidence that philosophy has ever come into existence anywhere except under Greek influences. … Of course philosophy may culminate in theology, and the best Greek philosophy certainly does so, but it begins with science and not with religion.”

There is truth and there is error in Burnet’s statements above. The word philosophy comes from philein (=to be friend of, to love) and sophia (=wisdom). Even the word itself asks for the meaning of friendship and of wisdom, if we are to understand philosophy. Is wisdom just “science” and is loving wisdom just an intellectual investigation? Beyond these questions: if loving wisdom, or “philosophy”, culminates in theology, as even Burnet admits, then would indeed be possible to have started as pure “science”? These are questions one can (should) think of even before starting to study the philosophers’ works, questions that would help avoid misunderstandings. 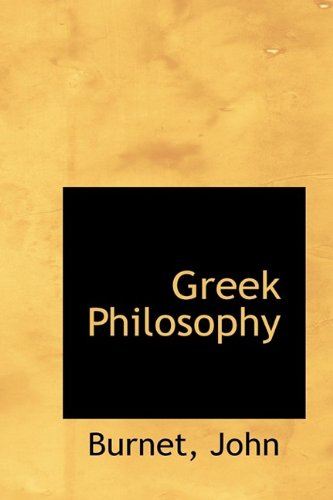 Burnet starts by applying modern schemes to Greek history, in particular by applying our recognition of an antithesis between religion and science, an antithesis that does not exist in Christianity, yet developed during the western medieval times by the dogmatical/authoritarian approach of Papacy to Christianity, which resulted to persecutions not only of heretics or supposed heretics, but even of scientists and any form of free thinking. The papal distortion of the meaning of faith is responsible for many of us today having difficulty to understand faith as something different from blind doctrinal belief.