Peter Forsyth, The Work Of Christ

Cf.  The Work of Christ at Amazon 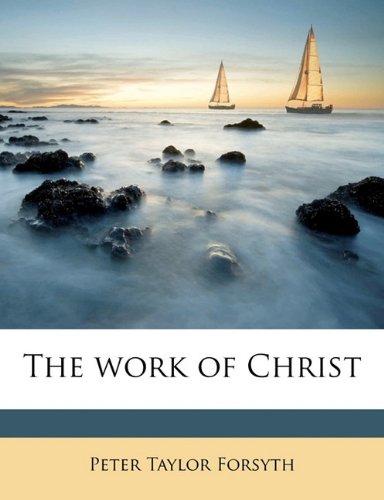 I. The Difference Between God’s Sacrifice and Man’s

II. The Great Sacrificial Work Is To Reconcile

V. The Cross The Great Confessional

These chapters need to have it said that they were given as extempore lectures from rough notes to a gathering, largely of young ministers, in connection with Rev. Dr. Campbell Morgan’s annual conference at Mundesley, Norfolk. They were taken down in shorthand and then carefully revised. They took place in July, 1909, immediately after the delivery of my Congregational Lecture on the Person and Place of Christ, which they supplement – especially when taken with my Cruciality of the Cross a few months before. It will be seen from the conditions that the book cannot pretend to be more than a higher kind of popularisation, though this is less true of the two last chapters, which have been more worked over. The style approaches in parts a conversational familiarity which would have been out of place in addressing theological experts. And as some of the ideas are unfamiliar I have not been too careful to avoid repetition.

My hope is to be of some use to those ministers who are still at a stage when they are seeking more footing on such matters than they have been provided with in mere Biblical or Historical Theology. There is no region where religion becomes so quickly theology as in dealing with the work of Christ. No doctrine takes us so straight to the heart of things, or so forces on us a discussion of the merits of the case, the dogmatic of it, as distinct from its scriptural or its ecclesiastical career. No doctrine draws so directly on the personal religion of sinful men, and none, therefore, is open to so much change in the course of the Church’s thought upon its growing faith and life. Thus when we consider that here we are at once where the form may change most in time and yet the feet be most firmly set for eternity, we realize how difficult and delicate our task must be. And we are made to feel as if the due book on such a theme could only be written from behind the veil with the most precious blood that ever flowed in human veins.

We are in a time when a spirituality without positive content seems attractive to many minds. And the numbers may grow of those favouring an undogmatic Christianity which is without apostolic or evangelical substance, but cultivates a certain emulsion of sympathetic mysticism, intuitional belief, and benevolent action. Among lay minds of a devout and social but impatiently practical habit, this is not unlikely to spread; and particularly among those whose public interests get the upper hand of ethical and historical insight and denude their religion of most of the reflection it demands.