How is a protestant icon of Christ painted? You make various assumptions (Christ is God and human, therefore omnipotent and incarnated, etc.) 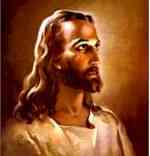 and you construct an entity, inventing various effects to depict the divine nature, adding whatever is needed to paint goodness, etc. Making a protestant icon is applying the humanistic ‘logic’ to christianity, a mixture of sentimentalism and guessing, actual proof of a faith that has become ideology and atheism; hence the body becomes a cell, the spirit, however powerful, is being imprisoned.

How is an Orthodox icon painted? You see the Christ and you depict what you saw, as accurately as possible.

It’s more of a photo than painting, while symbolical elements (schemes or ways) represent what can not be painted (e.g. His all-covering Glory), a ‘spiritual photo’ that differs from painter to painter in the ways in which the writings of the Evangelists differ, by the uniqueness the meeting with Him necessarily has (which is the reason why He is depicted looking at you, since He reveals Himself to you, unless there is described a story from the Bible where He looks to a certain biblical person), and it differs also from an everyday photo (where perspective prevails), because what was present in your perception has overcome everyday vision, which means that the body exists and simultaneously is invisible without having become immaterial!

The result is that the protestant icon forces you to respect Him, it founds distance and hell, while in the Mystery of the Byzantine Icon there is indeed present His straight-forwardness and love, which are also present in you to some degree, qualities by which you yourself respond to His revelation – or, to the degree that these qualities are absent from you, there is born holy fear; not because you are afraid something bad will happen to you, but because you are not able to stand before Him, to surrender yourself to Him; you feel a complete transformation for which you are not ready yet and you can’t know if you will ever be.

Cf. in the Gallery : Orthodox Icons of the Christ