Towards the European disunion?

As regular visitors recall, long before the current economic crisis these pages have been talking about the danger of Europe returning to its disunited past, judging from the lack of real solidarity, one based on common cultural grounds, and from the formation of the union only for economical gains. It is not difficult for one to infer that a business company is ready to collapse as soon as it does not bring the expected profit. 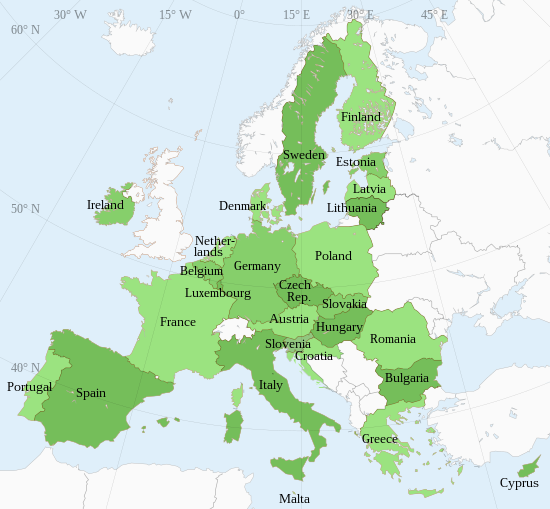 Will European countries, even separated, be able to achieve their dream of prosperity? The same question in different words: is European south the real problem of the north?

Perhaps this question will impede the European disunion, because it seems that, even as a business alliance, the union of European countries (or rather governments) may have less to gain and more to lose by dissolving into the former separation. It seems that the European middle class will more or less disappear giving its place to a greater distance between the few rich and a mass of the poor.

I won’t agree completely with the views expressed in this article by Jason Kirby and Michael Petrou. Although much of what happens now in Europe seems to point to a separation, there are reasons that make a separation rather improbable for the foreseeable future; the destruction of the European Union will make the rich European countries much poorer and (in many ways) weaker, than they will be by spending to support the European south. It is a duty of the European leaders to calm down the shortsighted reactions of their peoples.

Excerpts from “Can the EU be saved? – Europe’s grand experiment seems to be failing” (macleans). Emphasis (in bold or italics), added by Ellopos.

Since 2007, when Poland joined the Schengen zone, a border-free travel area consisting of 25 European countries, Germans and Poles have freely criss-crossed into each other’s countries to shop, dine and work. With his call for security checks at the border, Hübner has challenged one of the pillars of modern Europe: the free movement of people and goods between nations.

Taken on its own, the border squabble in Guben is a seemingly minor concern, but it comes as the twin forces of economic stagnation and surging nationalism threaten to tear Europe apart. Even as European leaders struggle to halt the spread of the debt crisis—a task that they increasingly appear unable to handle—a wider backlash against European integration poses an existential crisis for the continent. Europe is failing, both economically and politically, leading to the question: can it be saved, or is Europe destined for the embalming slab in Guben?

The most immediate threat to Europe is the infectious debt crisis, which some argue will inevitably lead to the collapse of the euro currency zone. After decades of unsparing social programs, not to mention bank bailouts and stimulus measures, many European nations are saddled with massive debt loads and deep deficits.

The European Central Bank is fighting back by aggressively buying up the debt of struggling countries in a bid to suppress rising interest rates. At best that’s a stopgap measure, though. Nor is a bailout for Italy on the table. The total cost to rescue Italy and Spain has been pegged at $1.4 trillion. And so governments have been forced to take a slash-and-burn approach to their budgets. At an emergency cabinet meeting in Italy on Aug. 12, the government agreed to a US$65-billion plan to eradicate the country’s deficit by 2013. “Our hearts are bleeding,” said Prime Minister Silvio Berlusconi.

Often when countries are faced with hopeless insolvency, they devalue their currencies to make their exports more attractive. Since the PIIGS are tethered to the euro, that option isn’t available. Cardiff University economist Patrick Minford argues that most of the countries in Southern Europe are likely to default whether they stick with the euro or not, so they’re better off controlling their own currencies.