The top 21 countries persecuting all Christians

One-hundred percent of Christians in 21 countries around the world experience persecution for their faith in Christ as over 215 million Christians faced “high levels” of persecution in the last year, a leading human rights watchdog group reports.

Open Doors USA released on Wednesday morning its 2017 World Watch List, which is the 25th annual ranking of the top 50 countries where Christians face the most persecution.

“2016 was the worst year of persecution on record with a shocking 215 million Christians experiencing high levels of persecution for their faith,” Open Doors USA CEO David Curry asserted during a press conference at the National Press Club.

“It is worth repeating that nearly one in every 12 Christians today lives in an area or culture in which Christianity is illegal, forbidden or punished. Yet, today the world is largely silent on the shocking wave of religious intolerance,” he continued…

In North Korea, Christians are prohibited from practicing their faith and can be killed or jailed for simply owning a Bible. As the Communist Kim regime forces citizens to accept the cultic belief that the Kim family is divine, thousands of Christians have been killed and entire families have been thrown into torturous labor “reeducation” camps for practicing their faith or trying to defect.

Although little is reported about the persecution in Somalia, Curry said that no organized church is allowed to be established in the country and every citizen of Somalia is registered as Muslim despite what they believe.

“Small groups of Christians remain even though nobody knows the secret of their faith,” Curry explained. “If their faith is discovered it means instant death, executed without trial and often on rumor alone.”

Pakistan ranked as the fourth worst country in the world for Christians, which is the highest the Muslim-majority country has ranked on the World Watch List.

Christians in Pakistan are subject the public ridicule and are often accused of the capital offense of blasphemy by Muslims looking to settle personal scores.

Additionally, hundreds of Christian girls and women in Pakistan are kidnapped, raped and forced into Islamic marriage. Police protection of the Christian community is inadequate and Muslim persecutors are often granted a level of impunity.

The fact sheet states that “Pakistan had the most overall violence against Christians.” 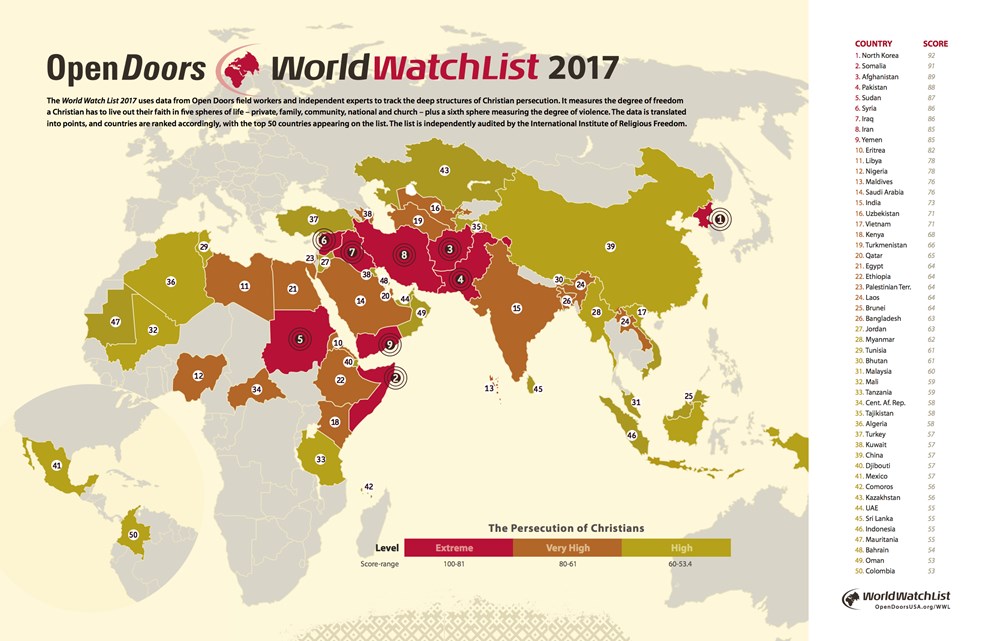 “Cities have been burned to the ground, people have been roasted alive, girls are increasingly being raped and forced into Islamic marriage in attempts by Muslims to gain a special place in Heaven through proselytizing in this manner,” Wilson Chowdhry, chairman of the British Pakistani Christian Association, told CP on Wednesday. “Government and statutory authority inactivity have built a sense of impunity for crimes against Christians.”