Martin Luther King: Being in the right direction

The world is a city

The world is now so small in terms of geographic proximity and mutual problems that no nation should stand idly by and watch another’s plight. I think that in every possible instance Africans should use the influence of their governments to make it clear that the struggle of their brothers in the U.S. is part of a world-wide struggle. In short, injustice anywhere is a threat to justice everywhere, for we are tied together in a garment of mutuality. What happens in Johannesburg affects Birmingham, however indirectly. […]

Slavery was so divisive and brutal, so molded to break up unity, that we never developed a sense of oneness, as in Judaism. Starting with the individual family unit, the Jewish people are closely knit into what is, in effect, one big family. But with the Negro, slavery separated families from families, and the pattern of disunity that we see among Negroes today derives directly from this cruel fact of history. […] 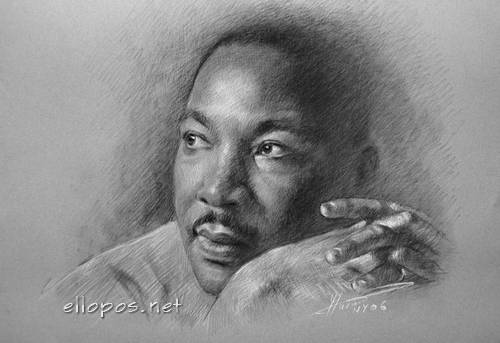 One book, not the Bible: I would have to pick Plato’s Republic

Amidst the struggle, amidst the frustrations, amidst the endless work, I often reflect that I am forever giving—never pausing to take in. I feel urgently the need for even an hour of time to get away, to withdraw, to refuel. I need more time to think through what is being done, to take time out from the mechanics of the movement, to reflect on the meaning of the movement.

That’s tough [: “If you were marooned on the proverbial desert island, and could have with you only one book—apart from the Bible—what would it be?”] Let me think about it—one book, not the Bible. Well, I think I would have to pick Plato’s Republic. I feel that it brings together more of the insights of history than any other book. There is not a creative idea extant that is not discussed, in some way, in this work. Whatever realm of theology or philosophy is one’s interest—and I am deeply interested in both—somewhere along the way, in this book, you will find the matter explored. […]