Human dignity in the Byzantine politeia

These developments in the relationship between basileia and hierosyne are reflected in imperial iconography – i.e., in the way in which emperors are depicted. Down to the time of the iconoclastic controversy, emperors most often were depicted in ways that emphasized their power – crowned with victory, for example, or astride a horse, trampling down enemies or hunting for big game. In the post-iconoclastic period, by contrast, emperors most often are depicted in ways that emphasize their piety and devotion to Christ – as donors, for example, offering to Christ a little model of the church they have built.

But the most famous depiction from this period – a mosaic leading from the narthex of Haghia Sophia into the nave – is different. It is closely linked to the controversy attendant on Emperor Leo VI’s attempt to enter into an uncanonical fourth marriage. Excommunicated, the emperor is compelled to beg for pardon – and that is precisely what this mosaic shows. To one side the emperor is prostrate before Christ, who is seated at the center of the composition, flanked at the higher zone by the Theotokos and the emperor’s guardian angel, intercessors for the penitent. 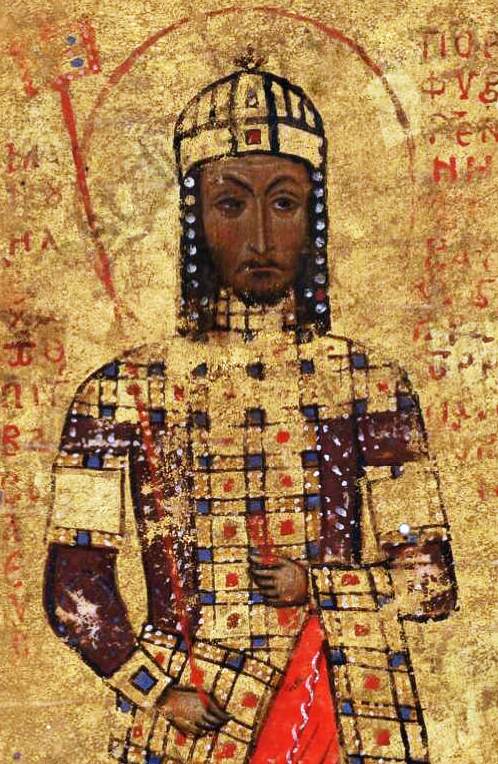 An emperor prostrate in repentance! It is hard to imagine such a representation in Hellenistic times. It is equally hard to imagine anything comparable in Periclean Athens. But this mosaic does tell us a lot about how ancient Greek political philosophy was maintained and transformed within the Byzantine Empire of the Middle Ages. Here, as in the other imperial portrait mosaics that still survive in Haghia Sophia, all the trappings of monarchical rule are present – the crown and imperial vestments, for example.

We are reminded that Byzantium did indeed preserve what ancient political philosophy had come to regard as the most viable form of government – the one best suited for sustaining the politeia as a stable, well-ordered society in which human need for community and human desire for freedom are reconciled. But the emperor is no longer at the center of the composition, depicted as a triumphant conqueror or omnipotent ruler or superhuman demigod as once would have been the case. At the center is Christ, the only true Son of God. An anthropocentric vision for the ordering of human society has given way to a theocentric one. Attention is directed to Him, the true ruler of all who also is the true philanthropos, uniting in himself justice and mercy, and indeed all the qualities most necessary in a ruler.