They say it is a film for kids, but I didn’t understand this classification. “Someone like Hodder” is a film I wouldn’t like to miss. Henrik Ruben Genz, a brilliant director from Denmark leads young Frederik Christian Johansen and the other actors in inspired ways, up to a noble poem rather than a movie.

The story, based on a book by Bjarne Reuter, is about a boy’s rich spiritual life, in various contrasts and harmonies with neighbouring persons. Dream and reality are united, proving reality a personal spiritual gift and creation. The main achievement of the movie, indeed of the gracious combination of Genz with Johansen, is that we love Hodder and his reality becomes the only reality that matters. This happens to such a degree, that the movie ceases to be a movie! If you gave it to someone, you wouldn’t be giving an artistic joy and stimulation, however great or small, but a living friend! Even Chuck Norstadt stays always with McLeod, however we sympathise with their relationship, admire, will to have it ourselves, etc. David Copperfield even as a kid remains in his own adventure, he doesn’t get off the pages (or the movie), to live with us. Hodder walks off the screen and is really, exclusively and simultaneously with each and everyone who wants to be with him. Is a beautiful dream less real than an evil ‘reality’?, he asks. Is not reality at its home in whatever is beautiful?

I suggest that you get the DVD and enjoy the movie in full quality, but if you can’t, try to locate a downloadable version. 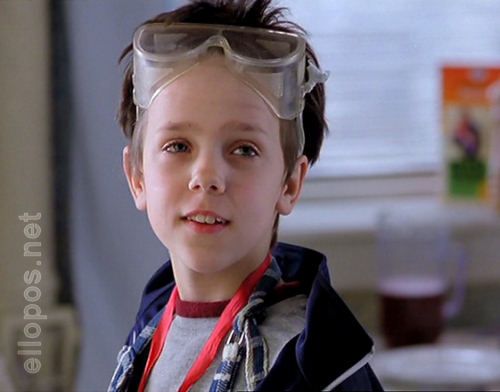 Review by Rich Cline (Shadows On The Wall)

This witty, dry Danish film is almost like a younger-sweeter Donnie Darko with its surreal examination of fate and purpose. Hodder (Johansen) is a cheeky boy living with his widowed father (Brygmann) and blissfully unaware that he’s the butt of all the jokes at school. Which is something, since his classmates and teacher (Neumann) are all rather loopy in their own right. When a little fairy (Stovelbaek) tells Hodder that it’s his destiny to save the world, he’s naturally overwhelmed by the enormity of the task. But soon his good-natured fearlessness combines with his rather large imagination as he starts to formulate a plan of action.

Telling the story completely from Hodder’s point of view keeps the tone fairly light, even when it’s dealing with rather significant issues. The characters are all vividly well written and played by the cast–each is a bundle of idiosyncrasies, and we’re not sure if this is how they really are or how Hodder sees them. But it doesn’t matter at all when it’s this enjoyable … and telling. Meanwhile, Hodder’s escalating quest is nicely paralleled against the more down-to-earth issues he’s facing at home and school: serious things that really get under our skin, because we can see how important they are, even if Hodder can’t.