As you have seen in the last chapter, Philip had one great enemy in Greece, the orator Demosthenes. He had distrusted Philip from the very first, and had kept warning the Athenians that the King of Macedon was very ambitious, and would soon try to become master of all Greece. When the Olynthians asked for aid, he had warmly urged the Athenians to give it, saying that they ought to bring on the conflict with Philip as soon as possible, so that the fighting might be done outside of Greece. In spite of his good arguments, however, Demosthenes failed. 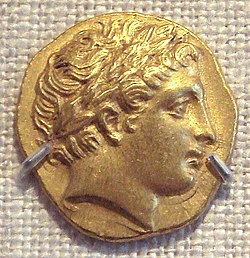 Philip took not only Olynthus, but all the towns which formed the Olynthian union, and destroyed them so completely that a few years later one could not even find out where these once prosperous cities had been. Demosthenes made three very fine speeches in favor of the Olynthians, and several against Philip. These were written down, and have been translated time and again. You may some day read and admire them for yourselves.

Of course, when Philip heard of Demosthenes’ speeches, he was very angry; but he thought that his gold could do wonders, so he sent a beautiful cup of that precious metal to the orator. The gift was accepted; still Demosthenes, instead of remaining silent as Philip had expected, went on talking against him as openly as before.

As Demosthenes was such a great man, you will like to hear how he learned to speak so well. He was an orphan, but very ambitious indeed. He saw how eagerly the Athenians listened to the best speakers, and he thought that he too would like to become an orator. Unfortunately, he could not talk very plainly, and instead of listening to him, even his playmates made fun of him. But instead of crying, sulking, or getting angry, Demosthenes sensibly made up his mind to learn how to speak so well that they could no longer laugh at him. He therefore learned a great deal of poetry, which he recited daily as distinctly as possible. To be able to do this without attracting any attention, he used to go down to a lonely spot on the seashore, where he would put some pebbles in his mouth, and then try to recite so loud that his voice could be heard above the noise of the waves.